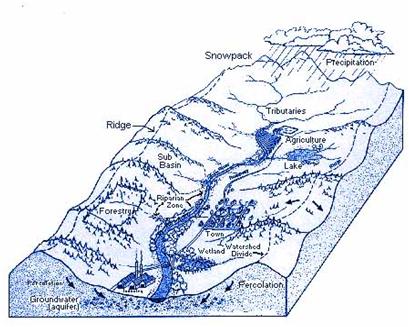 What is a Watershed?

No matter where you are, you are in a watershed. A watershed is the area of land where all of the water that is under it or drains off of it goes into the same place. Watersheds come in all shapes and sizes, and crosses county, state, and national boundaries.

All of the water that comes from higher elevation areas, including the water that runs down your street and into the storm drain (stormwater), ends up in one of five watersheds in Lakeland. The two we focus on is Scotts Creek and Oliver Creek. The appearance of our creeks has a lot to do with all the water that flows in it.

The water that flows into Scotts Creek and Oliver Creek can carry a lot of pollutants, such as:

There are also pollutants we cannot see such as:

While nature has its own system to take care of some of the pollutants, the altering of landscape by streets, parking lots, construction, houses, and an increase in pets and other animals can strain this system and make it ineffective.

Let’s imagine a time before the City of Lakeland where the people, houses, parks, and streets were not built. The landscape contains only sage brush, grass, and a few trees. The creeks and drainages meander from higher elevation to the rive rs and lakes. Along the creeks there are more trees and grasses.

When rain falls or snow melts, much of the water drains into the ground because the soil is a pervious surface.

Pervious surfaces, such as soil, allow water to drain through to another layer called the water table. This groundwater often sits above a rock layer, containing the water.

Some of the groundwater drains into rivers, streams, and lakes when the pervious surface becomes saturated and can no longer hold it.  Before this water reaches a creek or river it is carried through an area that contains taller grasses, more willows, and abundant wildlife. During the wet seasons, this area is marshy. This area is known as a wetland. Wetlands play an important role in a watershed. The shallow water, fertile soil, and plants help create the base of the food web. The smaller organisms feed fish, amphibians, and insects, who, in turn, become food for other animals, such as birds and mammals. Excessive sedimentation can:

The plants in a wetland help to filter suspended sediment out of the water before it reaches rivers and creeks. 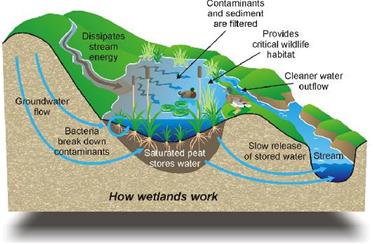 Wetlands are also one of nature’s filters. After a heavy rain, the water in the river may appear cloudy or dirty. This is due to clay and sand, called sediment, being carried by water into the river.

Sediment can settle to the bottom of the river and over time it can accumulate as thick layers. This effectively seals off the natural gravel stream bed which is critical for fish, aquatic plants, insects, and other creatures. In this natural system, the wetlands flood during wet seasons and contract during dry seasons.

Before Lakeland contained houses, schools, and stores, this flooding cycle caused very little damage. the rain and snow were relatively clean and the wetlands could handle filtering the sediment that it carried. Now let’s begin to think about the development of Lakeland and how it is affecting the watershed, our water quality, and the aquatic environment. Early settlers built their homes near their drinking source. As the city grew and changed, much of the natural system changes. Creeks were channeled, some were piped underground, and much of the wetlands area around our major creeks and rivers disappeared.

Rain and snowmelt cannot drain into the surface and need some where to go.

This stormwater flows into storm drains. These storm drains empty into drainages and our creeks. Along the way, the water can pick up litter, oil, pesticides, grass clippings, sediment, bacteria from pet waste, and many other pollutants.

That water is never treated.

Restoring wetlands near our creeks help keep them free of sediment, help prevent flooding, and can begin to make our creeks less polluted. Many places along the creeks are undeveloped, meaning that there are no houses, businesses, or other buildings nearby.

Bank stabilization is a way to improve water quality because...

Everyday little actions can lead to major changes in stormwater quality as well. Here are some of the things you can do:

A map of all watersheds in Lakeland can be found in this map (PDF). Find out which watershed your subdivision affects.

What we do in Lakeland affects a much bigger system, a system that directly and indirectly impacts our health and the health of the animal and plant life.

Let’s work together to improve the water quality
of Lakeland and the health of its community.