Due to the construction of the Texas Gas Pipeline, the 2022 Summer Entertainment Series has been relocated to the new Lakeland Athletic Complex at 9661 Memphis-Arlington Rd. Check out the schedule here. Saturday, June 22: The Mighty Electric Saint Jude Band (One hour prior to the band taking the stage, children’s entertainer Patty Shukla, will take the stage)

The last concert of the season! It was a great turnout with great music and food...plus, friends and families enjoying scenic IH Park. Super 5 rocked the LAMP (Lakeland’s Amphitheater) at International Harvester (IH) Park, Saturday, June 24, for a nice crowd coming out to enjoy the show.

Food trucks, Central BBQ, Caliente’, and MEMPops, offered up fresh menus with hot and cold foods. The kiddies had a blast making their way through the obstacle inflatables and had their faces painted courtesy of Mark Louderback with Edward Jones in Arlington. If that weren’t enough fun for the youngsters, Mr. Mike the Balloon Man entertained them with his magic, turning ordinary balloons into whimsical creatures. Good weather, good food, and good entertainment presented the perfect ingredients for a wonderful outdoor concert. A good time was had by all.  -Photos/copy by Kim Odom (Also, photos by Jim Willis) Food and treats available by Central BBQ and Kona Ice of Memphis were delicious. The kids took home lots of cool stuff thanks to our generous sponsors: Pop-A-Lock, Boomerang Escapes, and Mark Louderback with Edward Jones Financial. An extra special thanks goes out to the Shelby County Sheriff’s Officers and EMTs for directing traffic and keeping everyone safe! The Count down Is on!

The City of Lakeland’s Summer Concert Series at IH Park located at 4523 Canada Road on Saturday, July 30, from 7 to 10 p.m., will feature one of Memphis’ premiere party bands, Swingin’ Leroy specializing in rock, pop, country, R and B,and funk.

The high-energy band will get things rocking and popping at The LAMP (Lakeland’s outdoor amphitheater) during the first of four concerts. Help spread the word that Lakeland will be jammin’ at the picturesque setting of the 65-acre park overlooking the beautiful five-acre lake.

Adults are invited to sit back, relax and enjoy a cold brew from the beer garden. The family-friendly event will feature entertainment for all ages. There will be plenty of fun for the kiddies in the designated play area, featuring a bounce house sponsored by Sprouts (who will be on hand with healthy snacks), face painting sponsored by Mark Louderback/Edward Jones advisor and Christine Conwell/Sam T. Wilson Public Library, plus games and giveaways sponsored by Pop-A-Lock (Amy Wilkins).

Don’t miss the Open House for the IH Clubhouse’s Rec Room with a new extended deck area available. Guests are welcome to check out the recreational room with a pool table, shuffleboard, darts, and more.

There will be plenty of parking available in the new parking lot just south of the driveway into IH Park. Additional parking will be available in the parking lot across the street from the park at Lakeland First Baptist Church. Shelby County Sheriff’s Department officers will be on hand for traffic control and will be strolling the park throughout the event.

Bring a blanket, chair, cooler, and don’t forget to invite a friend or two to hang out under a moonlit night filled with friends as Lakeland proudly caters to the community by bringing a high level of live music and entertainment to The LAMP. More concerts will be announced soon. For more information, call 901-867-2717. Thanks to all those that came out and celebrated the grand opening of the outdoor event stage at I.H. Park, Saturday, November 7th, 2015.

Guests brought their lawns chairs and cozied up around the new stage to enjoy the live performances by Ted Horrell and the Monday Night Card, followed by The Dantones.

The complimentary hot chocolate was served up by city staff to help keep the chill off, and hot fresh barbecue was available brought to you by Central BBQ.

The food truck offered a delicious menu that included a variety of dishes spotlight the famous award-winning barbecue they are known for nationally.

The outdoor event stage was conceived by the former commissioner, Gene Torrey, and Mayor Wyatt Bunker. Torrey was given the honors of cutting the ribbon during a ribbon-cutting ceremony hosted on the stage during the grand opening. The venue situated among a picturesque backdrop of the natural beauty of trees and a 5-acre fishing lake, is the perfect setting for various activities including outdoor concerts, weddings, theater, family movie nights, and other community events.

Special thanks to Mark Sims, owner of SS Outdoor, creating beautiful outdoor living since 2004. The quality of work on the stage has brought lots of attention to I.H. Park located on Canada Road. Sims’ attention to detail sets the new outdoor venue apart from other outdoor spaces in the area.

Torrey said of the stage, I believe it will become a main gathering place and entertainment center for city events and many activities for its residents. The amenities of the outdoor stage will provide a great opportunity for residents of Lakeland, right in their own backyard.

The addition of the events stage is a continuation of the expansion plans for the city of Lakeland’s Parks and Recreation department. There are future plans to include a terrace around the stage, party decks and permanent restroom facilities. Additional parking will be added while maintaining the natural beauty of the park. 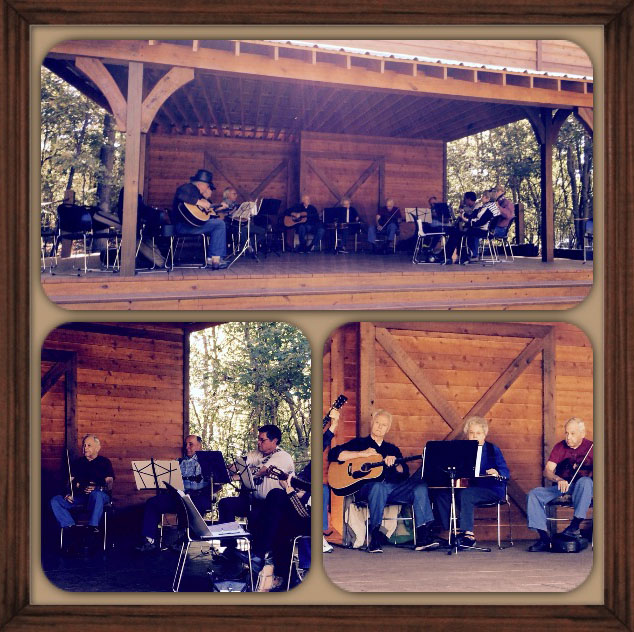 Normally on Mondays, a group of talented senior musicians gathers indoors for Jamming at the Senior Center, from 2 to 4 p.m. at Lakeland Senior Center, 4527 Canada Road.

Today, the group took full advantage of the beautiful newly constructed IH Park Event Stage to play outdoors. We had so much fun, said Marilyn Parker (then LSC Manager). It was like sitting on your front porch, but so much better. The scene of the lake and the leaves on the trees turning colors was spectacular.

For more information on this and other activities held at LSC, visit the Just for Seniors 55 and Over page. Lakeland’s new event stage, conceived by (then) Commissioner Gene Torrey and Mayor Wyatt Bunker, is situated within a natural amphitheater that is a perfect setting for concerts, weddings, and other community events, with I.H. Park Lake providing a picturesque backdrop.

Commissioner Torrey said, This will be the crown jewel of our parks system. It will become the main gathering place and entertainment center of the city for our residents.

(Then) Lakeland City Manager, Jim Atkinson, said We’re excited for the addition of this events stage as we continue to expand our parks and recreation offerings. The stage will provide the perfect venue for future events such as concerts in the park, family movie night, and other community events.

Future plans include terracing around the stage, party decks and permanent restroom facilities. Additional parking will be added while maintaining the natural beauty of the park.

Upcoming events at the I.H. Park Events Stage will be announced via the website and other outlets. The City is planning a full slate of events in 2016, including a summer concert series. Special thanks to the contributions of Fireworks City, Lowe’s Home Improvement, SS Outdoors and Ellendale Electric.

Located at 4523 Canada Road, this 65-acre park consists of rolling hills, a five-acre fishing lake, event stage, pavilion, over 20 picnic facilities and a portable restroom. There are 2.8 miles of walking/ jogging trails, along with biking and hiking trails through the wooded areas. A map of walking and biking trails at the International Harvester Managerial Park is available at the Parks and Recreation page.

The International Harvester Managerial Clubhouse and the Lakeland Senior Center are part of the park. I.H. Clubhouse is a multi-purpose facility that serves the City of Lakeland through its diverse uses for recreational classes, programs, and public meetings. The Senior Center serves active adults 55 and over.